A record of my work on my many wargames projects...

Well, I've been getting back to the project I originally started this webpage for - my Napoleonic Imperial Guard.

I've been playing around with the design of the lasgun I want them to carry. Here is the Brown Bess flintlock musket - the weapon the Napoleonic British army carried (rifles aside, of course).

And here's a lasgun.

I need to turn one into the other.

Now, given that these are supposed to be Imperial Guard, not just sci-fi Napoleonic, I prefer the idea of a' musket-like lasgun' to a 'lasgun-like musket', so it should be more of a lasgun than a musket. So, rather than use the Empire Hangunner muskets and convert them into a lasgun, I'm choosing to start with the lasgun and convert it to look more like a musket.

The main features of the musket are the top mounted barrel and the long length. As such, I've come up with three concept designs that I'd like your opinion on. A. This is the simplest design - simply an elongated lasgun. It is clearly a lasgun, but with the musket like length.

B. This is the most 'musket-like of the three. It has the length, the top-mounted barrel and a musket like muzzle - straight cut with a small bayonet mounting/sight.

C. This is a combination of the upper two designs. The lengthened, top mounted barrel, along with a lasgun like muzzle.

Anyway, I'd like your opinion on which is better, or what alternatives could you suggest?

Please, let me know! Thanks!

Next, I thought I'd post something a finished just before the wedding got fully underway!

It's an Iron Warrior Dreadought that I've converted as a commission for a friend at my local Games Workshop.

More photos can be seen in my new Commissions Gallery.

3D Space Hulk Board - The Library

It's coming to the end of term, and as a teacher I've found myself very busy with little in the way of modeling time! However, to prove that this is still an on-going project, here's some of my latest work!

This has been a LONG process. I need too many books for the shelves for bitz websites to have enough, so I've been making them using thin plasticard. It takes a suprisingly long time to make 10-12 (which is what I tend to make as a batch), and it takes 17-24 to fill a shelf. And there are 9 shelves, 32 cubby holes, and so on.

So, a long haul piece of work. However, the room itself is finished, so can be painted, and each self glued in place as and when I finish one! It will be a few weeks before I can get shots of this (end of term, wedding and honeymoon will sort of fill that time...), but hopefully they'll come soon enough.

3D Space Hulk board - A friend lends a hand!

I'm pleased to share a piece of work done for me by my friend Ali. She's a Space Wolf fan, and she agreed to help me paint my dead marine!

The image is my modelled version of an image from the Deathwing suppliment for the 1st edition of Space Hulk. However, I knew that I'd be completely unable to do this dead Space Wolf justice! Step in Ali!

Ali has done a great job, and I love the look of this! It's not finished yet (it still needs more battle damage, and perhaps a bit of weathering - Will have to do puppy eyes at Ali...).

I've some extra free time this week, so I'm dedicating some time to painting the detailing on my 3D Space Hulk board.

This is the results of Monday's painting!

You can see all the pictures from Monday's painting in the Space Hulk Photo Gallery:

Ok, well, just so we all know this isn't a dead project...

The reason for the lack of updates is because the current step is a VERY long one, with little in the way of interesting updates!

However, this one does seem interesting enough to post.

I'm nearly finished painting the base colours onto the walls and floor of all the board sections. 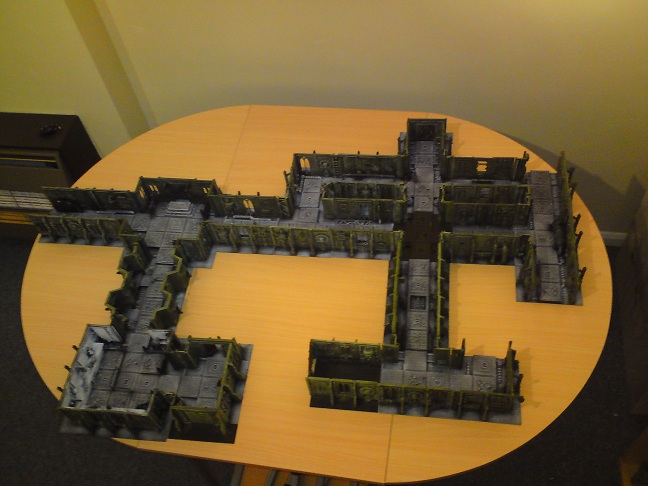 It've done three layers of green, and four layers of grey to white on the floors. This will mean that very soon I have the whole of the 'mission 1' phase of the board painted to what I'll consider 'tabletop' standard. It'll look fine for playing games in at my LGW, but all the detail work and weathering will still need to be done.

Here's a close view for the work so far. 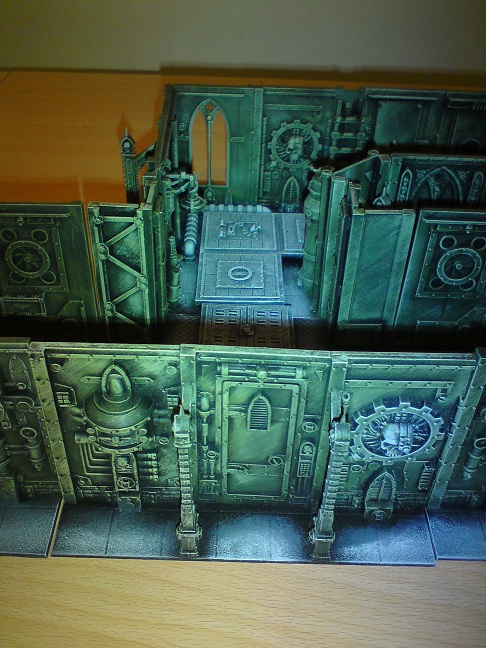 You can see that the fans, vents etc all still need doing. The walls and floor also need weathering, and all the decorative details need to be done.

An upcoming, and very silly, part of the project, will be the £80 board section... Simmilar to my cathedral section, but instead of having little statues, it will have two of the big SM statues instead. Will look spectacular. But be insanely expensive! Ah well!

I've been adding more detail to the base of my genestealer trygon. So far, it's gone pretty well!

I've added a guardsman, clinging desperately to the gantry whilst a genestealer clambers after him. Still finishing off to do, but not bad so far!

Well, since I got my new trygon, I've been having so much fun!

With the first of my two trygons, I have made an addition for my classic genestealer army. Here it is!

It's been made in much the same way as my classic genestealer carnifexes. The back was cleaned and resculpted, the claws created from bits from both trygons, the scything talons are from the tyranid warrior set (they look smoother and more like extended stealer claws, linking them with my other fexes, lictors etc.

However, my real joy came in building the base...

For full pics, just head over to my Tyranid Gallery.

As I've learnt from my carnifexes, magnetising is a great thing. So, here is my magnetised trygon. I hope to get an extra head so  can use this model for all three kinds of trygon/mawloc, depending on how I feel. It's also a bit more future proof - as I need to go back and rebuild a bunch of my old fexes...

For full pics, again just head over to my Tyranid Gallery.

As promised, here's some of the painting WIP shots!

Still lots to do, of course, but it's great to be making a start!

I've been plodding along with this project, but it's still well underway!

On tuesday, I spend a good three hours and five cans of black spray undercoating all the board sections I have got finished so far. IT was VERY cold and damp - far from the ideal conditions, but eventually I got it all done! I've even begun adding the main colour scheme! Pics soon, I promise!

For the moment, however, I've added some new images to the Space Hulk Gallery, offering a glimpse of some of the interior detail I've done since my last batch of pics!

One of the reasons for the slow progress on my is that I'm also working on my genestealers! Am waiting with baited breath for my pre-ordered trygon so I can make a genestealer tyrgon! Anyway, here's a shot of a concept base I'm working on. I want to make a full squad of genestealers on a set of bases that can be placed together to make a fully enclosed tunnel, open at one end, so it looks as if they are charging down a corridor towards you. I want to make a presentation plinth that is hinged so the two sides of the 'corrdior' can open up to reveal the squad inside.

Anyway, below is the example I came up with.

As ever, more pics can be seen in my Tyranid gallery.

Of course, feel free to leave comments on any of the pics!